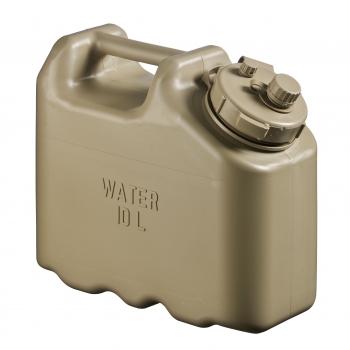 - Manufactured from food grade material - will not add taste, odor, or chemicals to the water
- Designed to preserve the quality of drinking water during storage and transportation
- Made of FDA approved materials
- BPA free

The large cap, the strap, the pouring spout and the breather cap are injection-moulded and fabricated from low-density polyethylene. The screw-cap is locked in the tightened position by means of a tab on the cap and strap assembly. Superimposed on the large cap is the small pouring spout, with its own cap, as well as the small breather cap assembly.

The Scepter MWCs also are compliant to the Canadian Forces specification CF-C-693, also states in section 3.2 that the materials used in the body, cap, and strap must be of food grade quality.

BPA is a key building block organic ingredient in some polycarbonate and other plastic materials, but it is not an ingredient in either HDPE or LLDPE, the materials used in our MWCs.

The longevity of a MWC - being plastic - is 15 years and beyond, and during that period there is no risk of plastic leaching into the water. In principle, the water can should be for transport and short-term storage.

Each MWC has a unic, integrated single handle that, in the dark, prevents mistaking it for the three handled MFC.

Scepter's MWCs are supplied to military armed forces around the world as accessories on OEM vehicles and for OEM military auxiliary equipment and systems. Able to add unique inserts into the moulds to identify ownership. 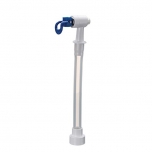 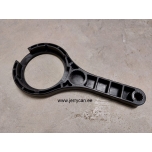